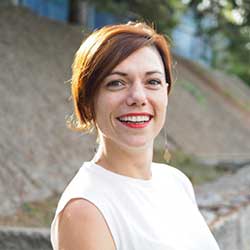 Beginning her career as an engineer, Anne has first developed renewable energy smart-grids in French islands through socially integrated projects, several times nationally awarded. She then advised multiple governments to install renewable and stable energy mixes in their islands.

Then keeping on using artificial intelligence during a Msc in cognitive neuroscience at the University of Montreal, she contributed during 3 years to scientific projects and communities embodying open-science, knowledge transfer, and ethics. of AI.

Now working in the heart of French Industry, she is leading the ecological transition at the Institut Mines-Télécom (IMT) by accelerating the transformation of practices in IMT’s engineering schools: Teaching, Research & Campus. She drives an ambitious roadmap on ecological transition by concretely leading many transformative educational events, designed for both students and researchers (Digital sobriety forum, large-scale digital fresk, new syllabuses, Controversy exercises on technologies…).

Appointed in 2021 as Femme de Tech at the French Academy of Technologies and member of INR, she created a lighting conference on the cognitive mechanisms involved in the uses of digital technology. She more widely popularizes these cognitive mechanisms in her second season of Podcast, which focuses on “the cognitive challenges of ecological transition”. Finally, she is a member of the HappyDev network of freelancers to support other structures and collaborates with the Forum des Usages cooperatifs and the FING to help reinventing the use of digital technology, as much as she can.